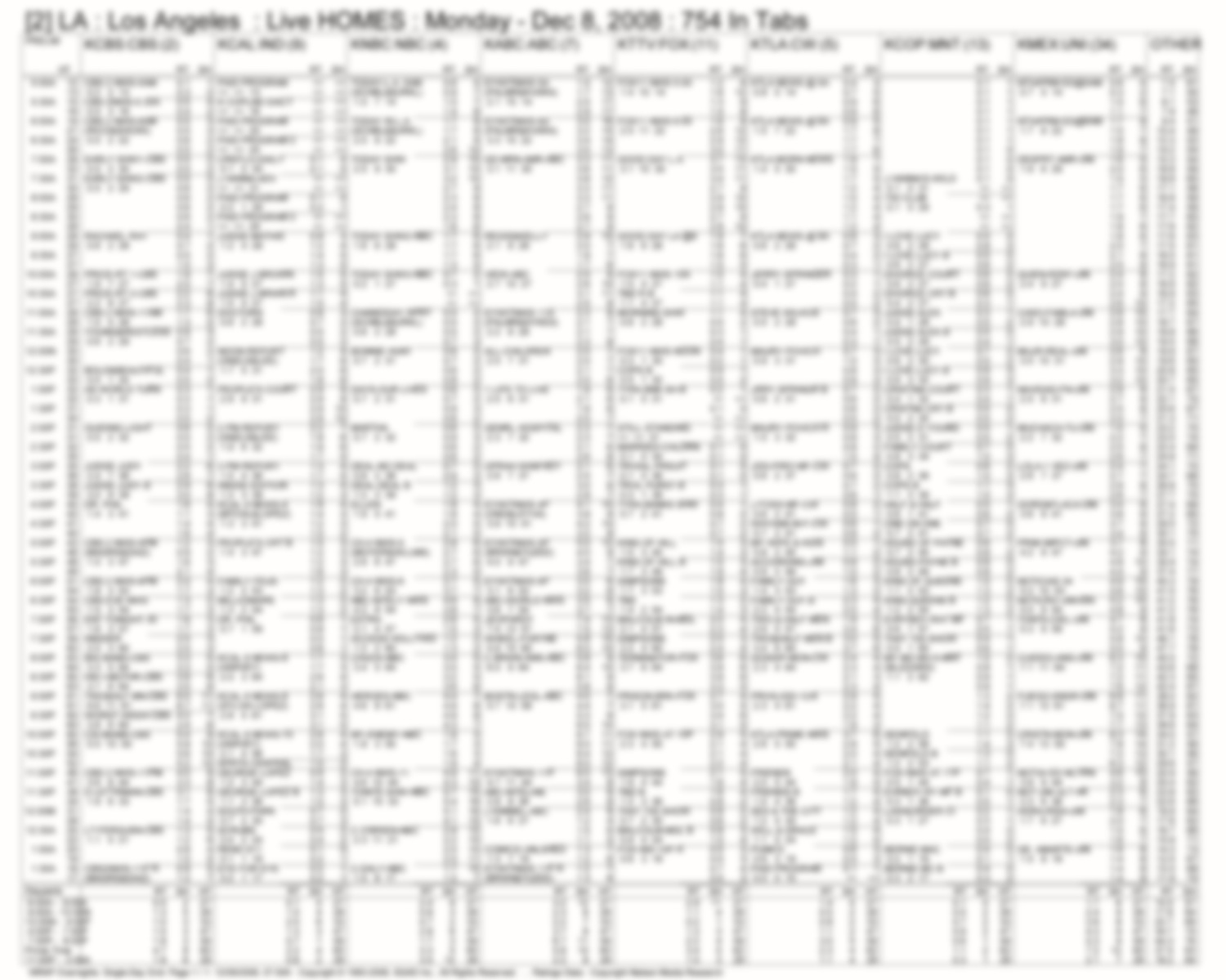 An actual ratings page with ratings data by quarter-hour. (The page was intentionally blurred to protect the data.)

I fell for it.

It’s hard to believe, given my decades in TV news, that I’d leave the set on when the basketball game was over and the local news came on. They’d promoted a story that sounded halfway interesting. And the reason for the promo, and the reason this was a set-up, is because this was the second day of Sweeps.

For the uninitiated—and nobody with a remote control in America is in that category any more—Sweeps is a 28-day period when TV ratings are measured. It’s when there’s a little less advertising, a little more promotion, and a lot of things coming up that sound like they’ll be really good. Of course, they’re often not any good at all. And that’s being polite!

Sweeps are not random periods. They’re defined by Nielsen, the market-research firm that pretty much has a monopoly on TV ratings. Sweeps always start on a Thursday and end on a Wednesday. The big ones happen three times a year—February, May, and November.

And truthfully, there’s no need for Sweeps. The need went away when Nielsen switched in the last decade to something known as Local People Meters, known in the trade as LPMs. They’re used in at least the top 60 TV markets in the country, and they get data on who’s watching what 365 days a year. One of Nielsen’s goals in rolling out LPMs, much as they had at least a decade earlier with National People Meters, was to reduce the amount of Sweeps stunting.

But of course, that hasn’t happened.

If I were a national advertiser and the TV salesperson called with a great rate on primetime availabilities, I’d be very suspicious. Is this a rate that includes the Super Bowl in averaging the audience? Because if it is, count me out. The Super Bowl is a once-a-year event that draws the biggest audience of the year to TV sets. Why would I be paying for Super Bowl numbers in March? The Super Bowl isn’t played in March.

Nor are the Academy Awards held in March. Nor the Grammys. Do I detect a stunting pattern here? All of this good stuff is carefully arranged to take place in the 28-day period known as Sweeps! It’s not a coincidence. (Truth be told, TV networks often pay historic sums to get the rights to these gigantic events not because they’re trying to use them to bump up their monthly averages directly so much as trying to capitalize on the huge audience to promote their own shows. A promo for a primetime episode in the Super Bowl may get to more views than the same promo aired 10 or 20 times in the network’s prime-time rotation.

But the ratings are available for TV viewing in the top 60 markets day in and day out, invariably by the morning of the next day, as I said. Haven’t the advertisers figured out that the numbers in March and April are way down from what they were in February?

Now when it comes to putting its best foot forward for Sweeps, TV news has a different approach than you might expect. It doesn’t start with the story. It starts with the promo. Yup, they come up with what they think is a promo that will grab, and then someone who to put something together that remotely resembles what they already told viewers they’d have on.

And that’s where I got caught after the basketball game. The promo said there was going to be a story about the LAPD in the air and the video showed a high-speed pursuit. (This is a classic error of promo-people: past pursuits aren’t very interesting, but live pursuits—particularly ones that go on for at least 45 minutes, because it seems to take that long for the texts and phone calls to pump up the viewing audience—can triple or quadruple ratings.) I was primarily interested in new trends in aerial policing, which the LAPD spends a lot of money developing. But that’s not what I got.

I got reheated pursuit video, which I knew had to be in the story. And then I got two glaring errors of fact that astonished me for their stupidity.

COUNT 1: The reporter’s assertion that in one case, quick action by the air unit had “kept a chase from becoming a pursuit.” Really? A chase is a pursuit. They’re the same thing. They’re synonyms. If you use the language for a living and you don’t know that, you shouldn’t get a paycheck.

COUNT 2: The LAPD’s Air Support Division has been fatality free since 1956. Really? What was that I covered in the 80s when a whirlwind took down an LAPD chopper? A guy in a uniform who was no longer alive? I had to do a little research—two clicks—to confirm it. Yup, March 1, 1983. Reserve Officer Stuart Taira killed by the rotor blades while trying to rescue two officers from a downed LAPD chopper. And then there was June 13, 1991, when two LAPD officers were killed when their helicopter crashed into a parking lot.

Wow! Two egregious errors of fact in two minutes of TV news. I won’t fall for it again. I’m sticking to fiction, where at least there’s some creativity in what people make up!